Last night I went to our (awesome) local library and heard a talk by Gerald Blaine who has just published this book. He is one of the Secret Service agents with JFK when the president was assassinated in Dallas. Another agent, Win Lawson, was there also.

I bought the book as a gift for someone, started to browse through it, and was still reading at midnight. Guess I'll have to keep this copy. It is a fascinating account of this terrible event and what these agents still think of as a horrendous 'failure.' At the time, they had no trauma counseling and actually never have had. It was only a couple of years ago during an interview for the Discover channel that they finally began talking about their own experiences. The book seems to have become a catharsis for some of these brave and dedicated public servants. After only a few chapters, I can highly recommend it.

The Making of An Agent

After 16 weeks of action-packed exercises that will test them to the core, the recruits in Training Class No. 283 will pass into the elite ranks of the Secret Service -- or leave humiliated 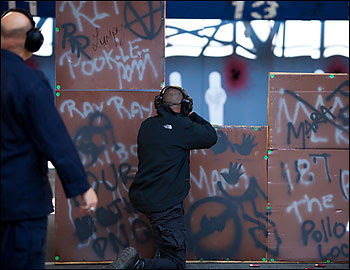 Special Agent in Charge Michael Bryant talks about the Secret Service and the rigorous program would-be agents must complete at the James J. Rowley Training Center outside Washington, D.C.


LESSON ONE: Get Ready To Die

The teacher walks into the mat room.

"Cut that [expletive] out. Don't act like you give a crap about my morning."

Steve Mixon smiles, or maybe it's a snarl. Before he became an instructor at the Secret Service training camp outside Washington, Mixon served as a team leader on President George W. Bush's Counter Assault Team.

"Everyone's going to leave today in some degree of pain," Mixon tells the special agent trainees.

The 24 recruits, dressed in black combat pants and jackets, stiffen into four rows, jingling handcuffs. Scott Swantner clenches his jaw. Krista Bradford rubs raw knuckles. One trainee, who broke a rib, is keeping it a secret, fearing he'll be discharged.

"Everything is in play here, guys. Everything you learned from Day One," Mixon tells them in a basement that muffles rifle blasts. "Assailant control. Guillotine chokeholds."

For the members of Special Agent Training Class No. 283, this is finals time. They have been cramming here for months, since days after the election of Barack Obama, hoping to join the men and women charged with protecting the president.

Not all of them will make it. Read More

You are invited to join Caroline Kennedy and The Honorable Ray Mabus, United States Secretary of the Navy, for a very special celebration of President John F. Kennedy's birthday this Sunday, May 29.

During this historic celebration, Secretary Mabus will officiate at the Naming Ceremony for CVN 79 - a United States Nuclear-Powered Aircraft Carrier - to be built in the coming years and christened in 2018.

This inspiring and colorful celebration will include remarks by Caroline Kennedy and other dignitaries; a video presentation of President Kennedy's August 1, 1963 Address to the U.S. Naval Academy; the Presentation of Colors; music by the Navy Band; and the formal announcement by the United States Secretary of the Navy of the name to be given to the nuclear powered aircraft carrier CVN 79.

The Ceremony will take place in the Stephen Smith Center beginning at 12:00 noon. The U.S. Navy has requested that guests arrive by 11:30 a.m. dressed in either Business Attire or Service Uniform.

Seating is limited and reservations are required. Click here to register.

This event will be webcast live at www.jfklibrary.org/webcast. 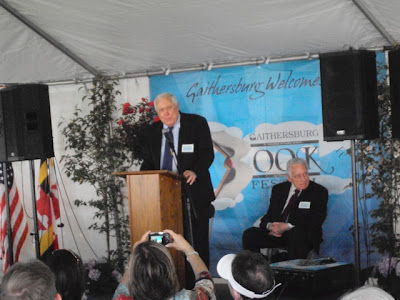 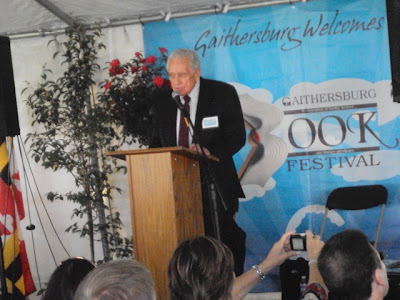 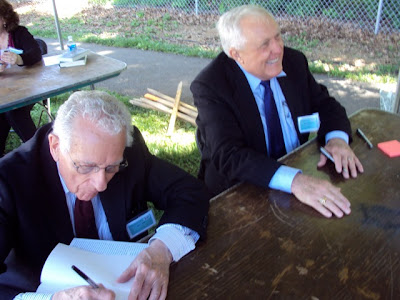 Photos Courtesy of Jeffrey D. Pullen
at 12:00 AM 0 comments

With a Gaithersburg Book Festival Fan!

On Saturday, May 21, a book festival was held in Gaithersburg, Maryland. Two of the featured authors were Gerald Blaine and Clint Hill from the Kennedy Detail book. While this was a life-time moment for me, it was my chance to have my son to experience history. Even though Terrell may be too young to understand the significance of the moment, years later he will be able to say that he shook hands and met two people who are etched in American history.

BTW: Before I could [ask] Mr. Blaine & Hill can I take of picture of them with my son, they beat me to the punch...and here is the proof.... 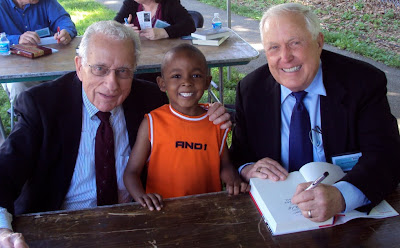 We told you about the recent trip to mid-Michigan by two members of the Kennedy detail, Secret Service agents whose job it was to protect JFK's life on November 22, 1963.

For Gerry Blaine and Clint Hill, in their own words, it was a job they failed to do, a burden that they've had to live with now for nearly half a century. Only now are some of their emotional wounds starting to heal.

Clint Hill, former Secret Service agent: "That's the name of the game in protection, you are at either 100 percent, 110 percent probably, or you are a failure."

Gerald Blaine, Author/former Secret Service agent: "But as an organization there are not many professions you can be 100 percent failure at. We thought we failed in Dallas, and all it takes is one mistake and everything is gone. On that particular day in Dallas, every advantage went to the shooter, we had none. We can't see who has been hit, if anyone's been hit, but apparently something is wrong, terribly wrong."

In writing his new book, The Kennedy Detail, former Secret Service agent Gerry Blaine has reopened some old wounds in order to help heal them. In the past century of American history, just one shift of Secret Service agents has lost a president- theirs. Emotional scars of blame have been festering for 47 years.

Gerald Blaine: "And so when it happened we buried it, we bit the bullet ourselves. There was no trauma counseling and we carried that all of our lives. It was a very difficult thing to do. We all became perfectionists. It was probably difficult on our children, we didn't allow mistakes after that."

Something former Michigan State treasurer Doug Roberts can relate to. He invited the retired agents to MSU to speak to students. Recently Dougs' father, the late Emory Roberts, was the Secret Service agent in charge that day when the president was assassinated. Emory Roberts also carried the burden of JFK's death to an early grave himself.

Doug Roberts, son of Emory Roberts/Secret Service: "My father lived for a number of years after the assassination, and of course we obviously got together on numerous occasions, and he would never talk about it."

Maybe no one has had it harder than agent Clint Hill. He was on the follow up car, on the running board, directly behind Jackie Kennedy. When the first shot was fired, he sprang off his vehicle and ran forward, slipping, but finally leaping onto the president's car in time to push the first lady back in, but too late to save the president's life.

Clint Hill: "Had I turned in a different direction, I'd have made it. It was my fault. If I had reacted a little bit quicker, I could have, I guess, I will live with that to my grave."

And in that rare and famous 1975 interview with CBS and Mike Wallace, Hill made it clear that constantly reliving the incident was for him a physical and emotional battle.

Clint Hill: "I have a severe neurological problem caused by what has happened in the past. They recommend psychiatric help."

Now with the passage of time and this book tour, Hill says he has managed to forgive himself for not being the one to take the bullet in Dealey Plaza, and admits, reluctantly, that if he had it to live all over again, the outcome might remain the same.

Clint Hill: "I came away with the conclusion that I did everything I could do that day. I couldn't have done anything more, I guess. When it happened it was like someone hit me in the stomach. I think I've lost my rage. At first I had a lot of rage. they're basically saying, you know, after 47 years, it's time, and also they're letting some of the burden off of them. They're making peace with themselves."

Hill was awarded a medal for his bravery on that day in Dallas, and yet...

Clint Hill: "It's always present, I still see certain images that will never go away."

It's a burden of failure only partially lifted, one that comes with an ominous cautionary note from men who witnessed a personal and professional tragedy, a nations' tragedy, firsthand.

Clint Hill: "We like to think that protection can be 100 percent, but we realize that it's not. There's always that possibility that something's going to happen. You never know what's around that next corner, therefore, there's a very distinct possibility at least that there will be an attempt, may not be successful, but I am sure at some point there will be an attempt. I just hope and pray that the agents who are there that day don't have to go through what I went through."