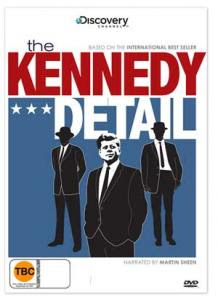 Often when I review TV shows they have to be really good for me to hold onto the DVD afterwards, instead of selling it. So when I picked this DVD to watch, I pretty much knew it would be a solid one to review, but was going to hit my ‘To Sell’ pile pretty quickly. Because really, what new information could this tell me?

“JFK’S Secret Service Agents Reveal the Inside Story of an American Tragedy Secret Service Agent Clint Hill was just ten feet from President John F. Kennedy, desperately trying to hurl his body in front of the gunfire, when the president’s head exploded before his eyes. Covered with blood and pieces of the president’s brain, Agent Hill pushed Jackie Kennedy into the back seat and, clinging to the trunk of the open top limousine as it sped away from Dealey Plaza to Parkland Hospital, all he could do was slam his fist in anger, and give the thumbs down sign to the agents in the follow-up car behind him. For nearly fifty years, the close-knit group of men who protected JFK have refused to talk about that tragic day. Until now.”

Despite my own feelings about the assassination of JFK, this Discovery special, 'The Kennedy Detail', was a heartbreaking watch. Seeing grown men of the secret service, nearly 50 years after the fact, crying and sobbing as they recount their stories was hard to watch. The show was both insightful and thought provoking, but really it just reaffirms in me that we lost one of the great people of the world that day. And yeah, I happily put this DVD into my collection.