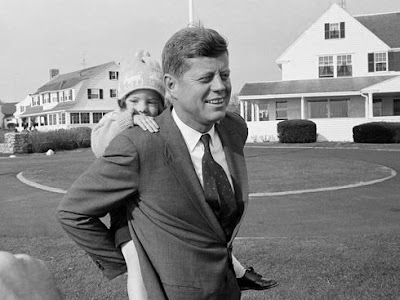 Today, as a willowy Park Avenue matron, she still is.

Former president John F. Kennedy's oldest and only surviving child has kept a lower public profile since her attempt to win one of New York's U.S. Senate seats last year degenerated into a political failure.

Now, she's stepping back into the spotlight to celebrate a political success: her father's.

Over the next three years, as the John F. Kennedy Presidential Library marks the 50th anniversary of a presidency that riveted the nation with its glamorous beginning and its tragic end, "She is going to be the one to take the principal role in the celebrations of her father's life," says John Culver, a longtime family friend.

Kennedy, 52, is working on three books to be published in conjunction with the festivities. She and her husband, New York artist and designer Edwin Schlossberg, also are helping the JFK Library and the Institute of Politics plan the commemoration of her father's presidency, from his election in November 1960 to his assassination three years later.

"She and Ed are in many ways the chief architects of how the 50th anniversary will roll out," said former Massachusetts senator Paul Kirk, a family confidant who served with Kennedy on the library foundation's board.

One of Kennedy's forthcoming books, due in fall 2011, has blockbuster potential: It is based on tapes of never-before published interviews her mother, Jacqueline Kennedy Onassis, gave to historian Arthur Schlesinger Jr. about her years as first lady.

Also next year, Kennedy and the JFK Library will issue a book for young adults commemorating her father's famous inaugural address, which urged a generation to "ask what you can do for your country." That will be followed in 2012 by an album of her father's family photos.

For most of her adult life, Kennedy has been the chief protector and promoter of her parents' legacy. For 23 years, she has served as president of the foundation that helps fund and direct her father's presidential library. After the death of her brother, John F. Kennedy Jr., in a 1999 plane crash, she took over his duties as a member of the advisory board to the Institute of Politics, established at Harvard University in 1966 by her mother and her father's brothers as a living memorial to the slain president. After her mother's death in 1994, Kennedy replaced her as honorary chairwoman of the American Ballet Theatre.

She already has edited several literary homages to her parents, including an anthology of her mother's favorite poems and a sequel to Profiles in Courage, her father's Pulitzer Prize-winning book about politicians who put principle above popular opinion.

Kennedy, who declined to be interviewed for this article, has largely shied away from political controversy and personal publicity for most of her life. An exception came in 2008 when she endorsed Barack Obama for president and persuaded her uncle, Sen. Edward Kennedy, to second her.

It came at a crucial moment, when Obama was reeling from defeat in the New Hampshire primary at the hands of Democratic rival Hillary Rodham Clinton. In a column for The New York Times, Kennedy said she was supporting Obama over Clinton, her home-state senator, because she felt he would be "a president who inspired me the way people tell me that my father inspired them."

The effect was electrifying: "Camelot Crowns Obama," read one TV headline. The onetime first daughter began flowering as a politico. Kennedy became a regular surrogate on the campaign trail. Obama, who declared her "a very dear friend," named her to the inner circle that vetted his vice presidential choices.

After Obama's election, it briefly appeared as if she might be the next Kennedy in the Senate.

In December 2008, Kennedy let it be known that she was interested in the New York Senate seat that Clinton was leaving to become secretary of State. There was family history: Her uncle, Robert F. Kennedy, served as New York's senator.

As she traveled upstate to meet with local politicians and to Harlem to break cornbread with Al Sharpton, Kennedy was trailed by a pack of reporters who parsed her every utterance, keeping count of her frequent "ums" and "you knows."

A Marist College poll showed Kennedy and New York Attorney General Andrew Cuomo, her cousin Kerry's ex-husband, as the favorites to be appointed to the Senate seat. But her inability to articulate her reasons for seeking the coveted appointment drew mockery. "The lady hasn't yet said but one word in public about the race, about the issues or about virtually anything," the New York Daily News editorialized

Before Gov. David Paterson could announce his choice, Kennedy abruptly withdrew her name from consideration, creating confusion and recriminations that added to a list of embarrassments that ultimately drove Paterson's approval ratings so low he decided not to run for re-election.

Since then, Kennedy has kept her political efforts focused on others. Last year she held a fundraiser to help Cyrus Vance— whose father served as her father's secretary of the Army — win the Manhattan district attorney's election.

Earlier this year, she was at the White House when President Obama signed his landmark health care bill and paid tribute to the decades-long struggle by her beloved "Uncle Teddy" to see the legislation enacted.

She is also focused on the printed page. In addition to the books she's producing for the 50th anniversary of her father's presidency, Kennedy also is compiling an anthology of poetry aimed at women, due in spring; a collection of children's poems the following year, and for 2013, a travelogue about the historically themed trips she and her cousins took every summer with their uncle.

Now that Kennedy's daughters Rose and Tatiana are in their 20s and son John in his teens, some friends hope Kennedy will give politics another chance. "If she's at all inclined, I would hope she would," said Culver, a former Iowa senator.

Kennedy's sense of duty to her family and its political legacy was apparent in a fond eulogy she delivered last year at the wake for Edward Kennedy.

"Now Teddy has become a part of history," she said. "And we have become the ones who have to do all the things that he would have done, for us and for each other and for our country."
at 3:35 PM