The Man Who Did Not Kill JFK

This story is included in The Kennedy Detail with previously undisclosed details. This happened to President-elect Kennedy after eight years of no serious threats against President Eisenhower. It was an ominous start for the new president.

Editor's note: CNN contributor Bob Greene is a best-selling author whose books include "Late Edition: A Love Story" and "Duty: A Father, His Son, and the Man Who Won the War." 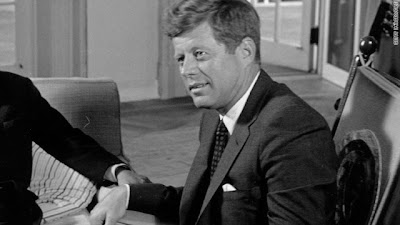 (CNN) -- In a few weeks a noteworthy anniversary will arrive: fifty years since the election of John F. Kennedy as president of the United States.

Much will be made of the fact that half a century has passed. Photographs of the young president and his family will be republished, retrospective essays will be written. Inevitably, as the Kennedy years are freshly examined, the name of the assassin Lee Harvey Oswald will be mentioned in the context of what might have been, if only Kennedy's path and Oswald's never had intersected.

But there is another name that you have likely never heard: a man who might have changed history as drastically and irrevocably as Oswald did. Kennedy was elected in November 1960; a month later, this man came very close to making sure that Kennedy never served a single day in office.

His name was Richard Pavlick.

"A craggy-faced retired postal clerk who said he didn't like the way John F. Kennedy won the election is in jail on charges he planned to kill the president-elect.

"Richard Pavlick, 73, was charged by the Secret Service with planning to make himself a human bomb and blow up Kennedy and himself."

Pavlick came much closer to killing Kennedy than most news reporters realized at the time. He was arrested in Palm Beach on December 15, 1960, in a car loaded with sticks of dynamite. Kennedy; his wife, Jacqueline; his daughter, Caroline; and his son, John Jr., were staying in the Kennedy family mansion in Palm Beach, preparing for the inauguration the next month.

Because Pavlick didn't get near Kennedy on the day he was arrested, the story was not huge national news. The announcement of his arrest coincided with a terrible airline disaster in which two commercial planes collided over New York City, killing 134 people, and that was the story that received the banner headlines and led the television and radio newscasts.

It wasn't until later that the complete story of a first Pavlick assassination attempt, a few days earlier, began to get out. It was that first one that might have changed American history.

Pavlick, who had lived in New Hampshire, spent much of his time writing enraged and belligerent letters to public figures and to newspapers. He resided in Belmont, New Hampshire; Belmont was at one time called Upper Gilmanton, and Gilmanton itself, four miles away, was reputed to be the model for the New England town in Grace Metalious' scandalous 1950s novel "Peyton Place." Thus, Time magazine, in its report of Pavlick's arrest in Florida, headlined the story: "The Man From Peyton Place."

"One day last month Richard Pavlick decided to do something worthy of inclusion in 'Peyton Place': he made up his mind to kill a president-elect. He took ten sticks of dynamite, some blasting caps and wire, and began to shadow Jack Kennedy. He cased the cottage in Hyannisport, sized up the house in Georgetown, headed south for Palm Beach." The magazine quoted Pavlick: "The Kennedy money bought him the White House. I wanted to teach the United States the presidency is not for sale."

Here is what was not reported at the time, and was disclosed later by a top U.S. Secret Service official:

On December 11, 1960 -- four days before he was arrested -- Pavlick drove his car to the Kennedy home in Palm Beach. He held a switch wired to the dynamite, which, according to the Secret Service official, was "enough to blow up a small mountain." His plan was to wait for Kennedy's limousine to leave the house for Sunday Mass, then to ram it and blow up both the president and himself.

Kennedy did not leave the house alone. Instead, he came out the door with Jacqueline, Caroline and John Jr.

Pavlick later told law enforcement officials that he did not want to hurt Mrs. Kennedy and the children. He only wanted to kill Kennedy himself.

So he waited a few days. A postmaster back in New Hampshire, troubled by some postcards that Pavlick had sent, alerted the Secret Service. That is how notification of the license plate of Pavlick's car made it down to Florida -- and that is why he was stopped and arrested on December 15. "I had the crazy idea I wanted to stop Kennedy from being president," he told reporters from his jail cell.

What if Pavlick had gone ahead with his plan on that first day -- what if the sight of Mrs. Kennedy and the two children had not dissuaded him?

"Had Pavlick been successful, [the assassination by Lee Harvey] Oswald and his murder by Jack Ruby would never have occurred. Had Mr. Kennedy been killed, Lyndon B. Johnson would have been sworn in as president in January, 1961. How would he have handled U.S. involvement in Vietnam, the Cuban missile crisis, or the civil-rights movement in the South?"

Next month a book about Kennedy's Secret Service detail in Dallas on November 22, 1963, co-written by a member of that detail, is scheduled to be published; advance publicity for the book has centered on the events surrounding that day in Dallas. It will be interesting to see if the Richard Pavlick story is mentioned, and, if so, if any new light is shed on the events in Florida in December of 1960.

As it was, Pavlick was ordered to be confined to a government mental-health facility. He would die in 1975.

And the Kennedy family remained in Florida during those final weeks of 1960. Allowed to live, they prepared for Christmas. United Press International reported that the tree in their home was donated by the West Palm Beach Optimist Club. The president-elect received, from his family, gifts of cigars and hand-knitted socks. All seemed safe and right in their world.

The opinions expressed in this commentary are solely those of Bob Greene.