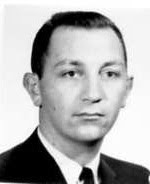 Dick was born in California and graduated from the University of California.

He joined the Secret Service in September 1959 and was assigned to the Eisenhower detail. When President Kennedy was sworn in Dick became a member of the Kennedy Detail.

On November 22 nd, Dick was assigned to the 4:00 PM to Midnight shift and was on post at the Trade Center when word came in that the President had been shot. Dick along with his fellow shift members immediately went to Parkland Hospital to assist in securing the hospital and provided assistance on the trip back to Washington D.C.

He remained on the White House Detail through President Ronald Reagan. He is survived by his wife of 44 years, Patricia and his son Erick B. Johnsen and his wife Diane and his grand daughter Isabella.

Dick personified the agents assigned to the Kennedy Detail in dedication to his profession and lived by the values of his generation. Dick provided material for "The Kennedy Detail." He will be missed.